Questions? Email me here at qpfiffer@gmail.com

Eric over at packrafting adventures designed and put this trip together.

This July, I decided to finally take a Swiftwater Safety Course and up my safety game on whitewater. The course ended up being really underwhelming, but I got to meet a few cool people, and Eric was one of them. Eric is an aventure racer and general outdoor enthusiast with a penchant for maps and long routes with a bit of suffering involved. We bonded over backcountry travel, alpine-style, and kept in contact after the class.

Fast-forward a month or so, and Eric invites me on a canyonlands figure-8 of his own devising. The general idea is that you start somewhere in the Canyonlands of Utah, hit the Colorado River to the confluence with the Green river, hike up and then do it in reverse (Green -> Colorado). This is a pretty neat trip in the backpacking/packrafting world.

We figured out dates (mid-September) and fired it off. Eric did all the schmoozing with park rangers and logistics, and I agreed to just have a good attitude about carrying heavy packs. 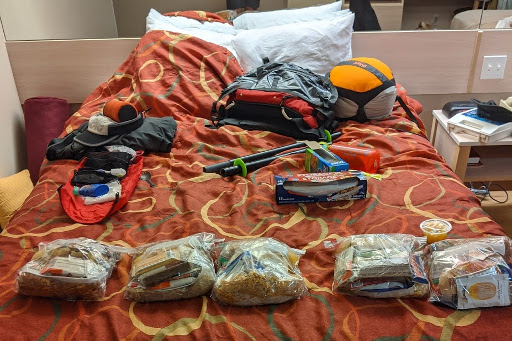 Prep involved five days of food, at least 4.5L of water, bags to poop into, paddling gear and clothing. The food all had to be put into rat sacks because apparently rodents are a big problem on the waterway. We also had to carry a fire pan even though a statewide fireban was in effect. The rules have since been rewritten here, but it was annoying.

Our packs ended up being 60+ pounds, with water and food. Soul-crushing, especially since I believe the Hyperlight Mountain Gear 4400s we were both using tend to collapse with heavy loads.

I kept it light by only bringing one set of clothing, but three pairs of socks. Socks are important. Don’t skimp. 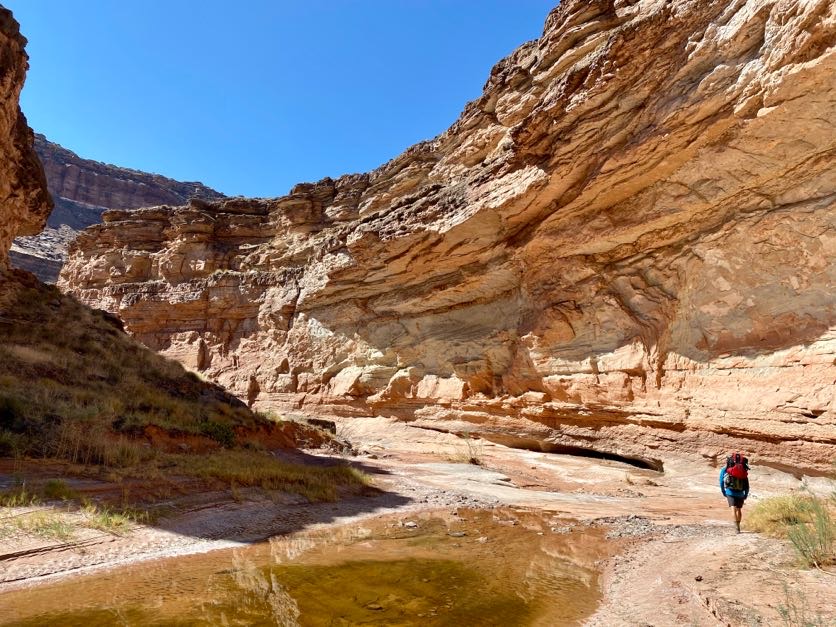 We woke up early that first day and drove out to place the car shuttle. It was nice and cool in the evening and I listened to Dark Side of the Moon the whole way out there. It was nice to have a whole week off to just go sleep in the desert. We were out and walking into our first canyon just an hour or so later. 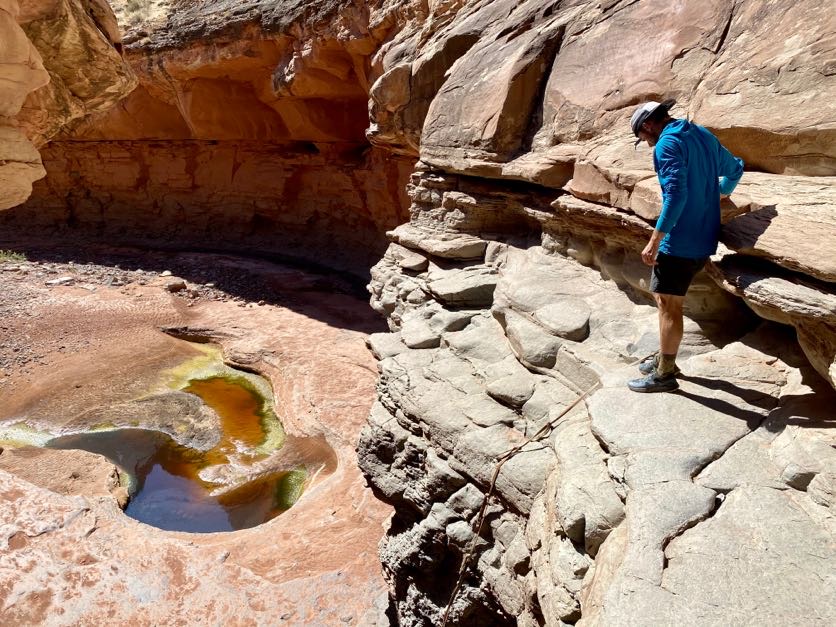 That first day was mostly getting used to the weight of the packs and descending into slot canyons, walking on cobble-ish rocks and over soft sand and down. We covered about 6.5 miles to the Colorado river, exploring the canyons and slowly getting baked out by the sun, then had a glorious transition and paddled to Spanish Bottom.

The river was low, flat and slow but it felt amazing to be in the boat instead of carrying it. 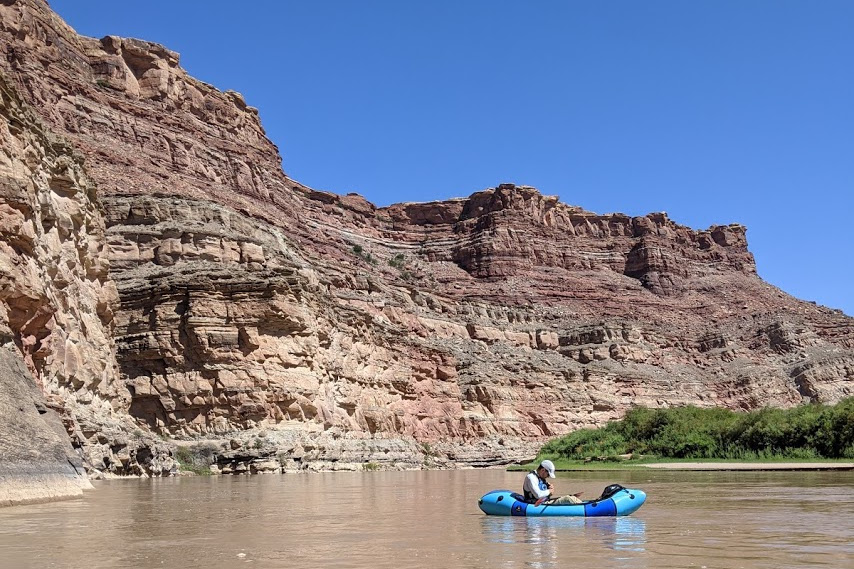 We had enough time after getting to camp we decided to hike up and check out the dollhouse. The hike up was pretty steep, something like 2500 feet, but it was worth it without packs.

After exploring for a while and failing to find the actual Anasazi Granary, we headed back down to camp and to sleep, going to bed pretty early. My notes mention something about a “Flotilla of Scum”, which was a reference to the random collections of pond scum and foam on the river. 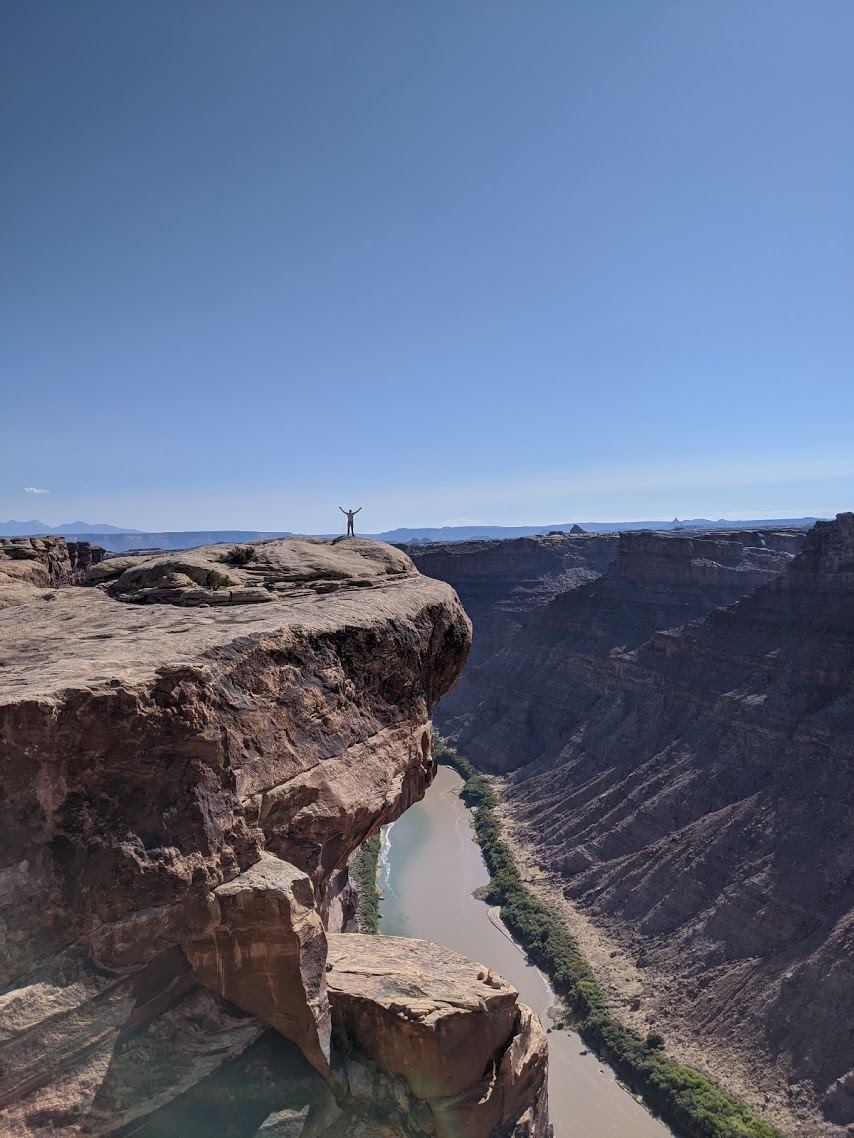 Day two was a hard day for me. We agreed to wake up at 5:30 every morning just so we’d have time to hike before the sun totally destroyed us. It was actually really nice to get into the rhythm, it definitely set the expectation for how the day was going to go, too. Eric is an efficient machine at packing, and I like to eat oatmeal, so we usually wouldn’t leave camp before 7:00 or so.

Starting our hike with the same 2500 foot climb as the previous day, but with our fully loaded packs, was pretty morale destroying. We’d end up covering 18 miles before going to sleep however, so it only got harder.

We started off by going to the overlook point, which was nice because we got to ditch the packs for a while and see the river from as high up as possible. 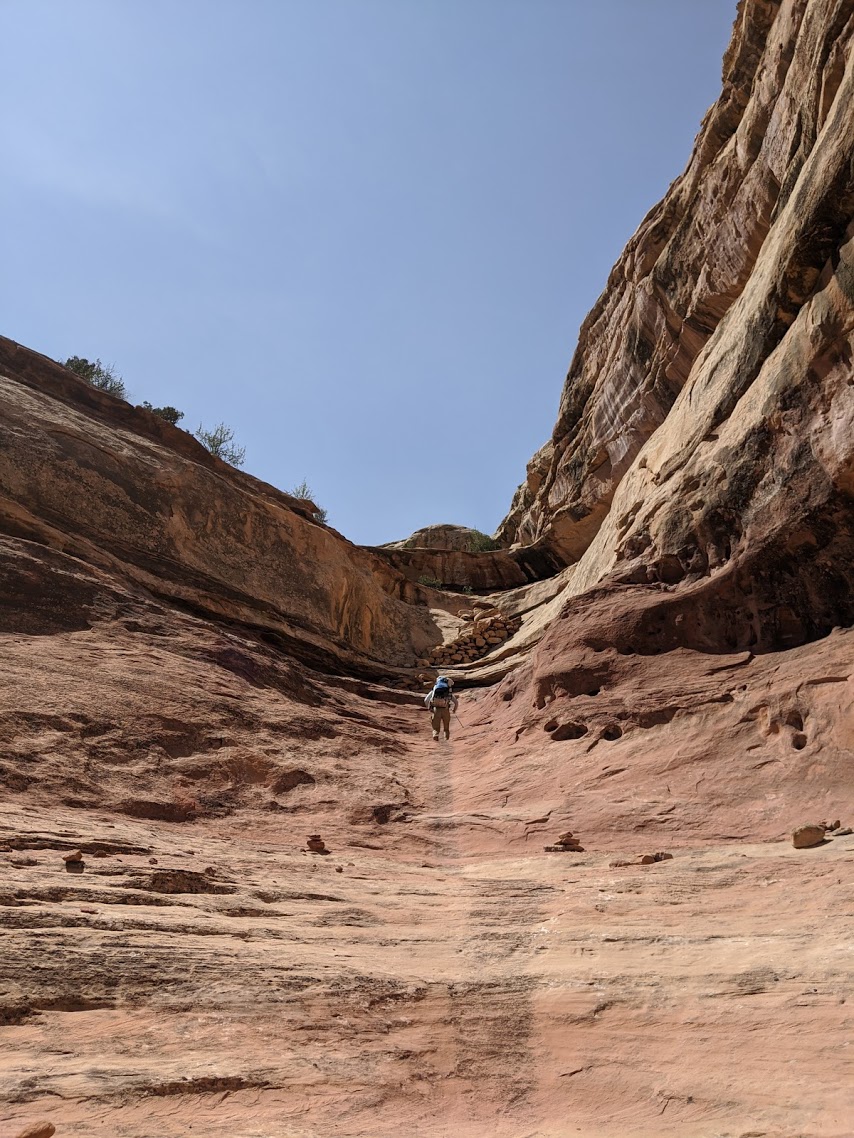 From there we hiked down and back around, dropping briefly into Water Canyon and then mindlessly slogging up Shot Canyon. Water was hard to find and I felt pretty terrible most of the day. The sun was always there. 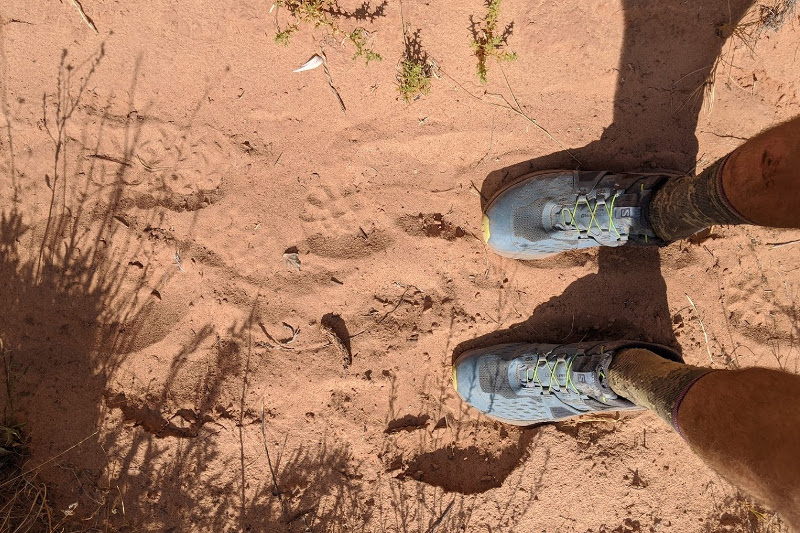 For some reason I thought getting to Chimney Rock would be some kind of relief from marching in the heat, but it really just marked the midpoint of the day. We kept slogging, eventually dropping off of the plateau and down back into the maze itself. We spent the rest of the day trudging slowly through soft sand. We did get to pass the gallery though, so that was pretty cool. 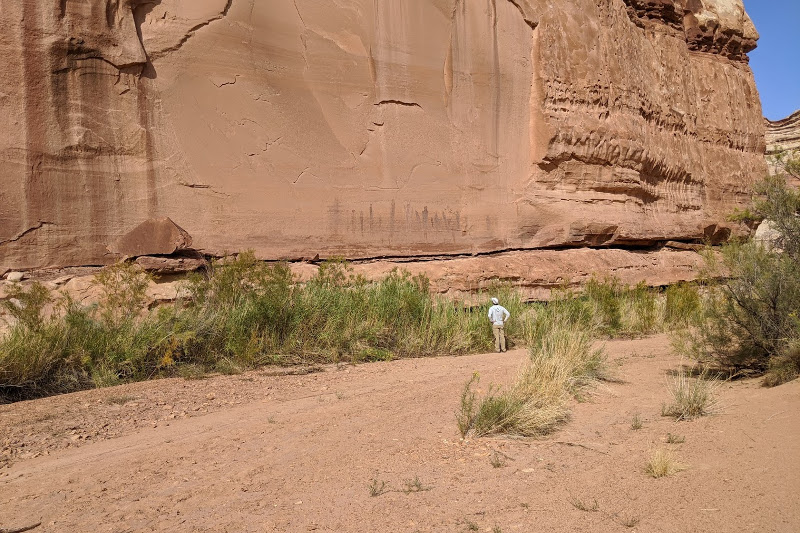 We setup camp in Horse Canyon, then found a small spring for water and trudged back. We were absolutely destroyed and in bed by 7:45PM. 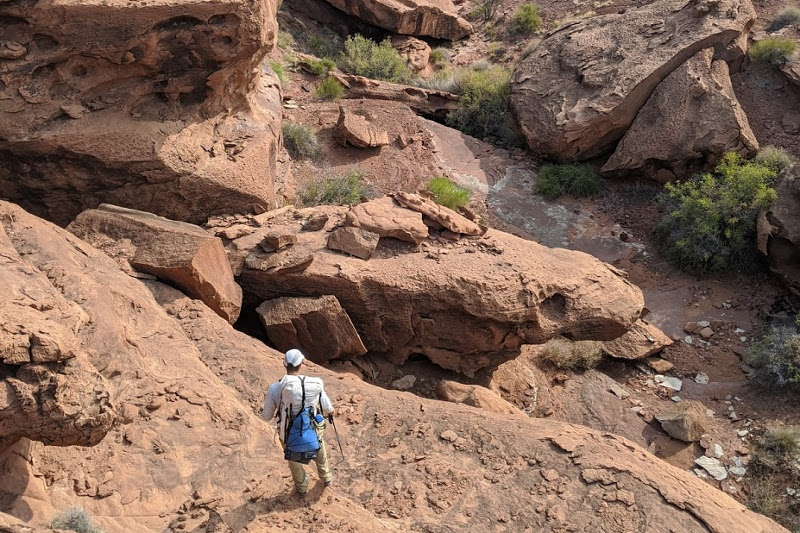 We woke up at 5:30 again, in the dark. It was a slower paced morning because we didn’t have to pack up the rafts. We took our time and enjoyed the morning. The spring was a bit more full this morning so we topped off water before beginning the long trek down to the Green. 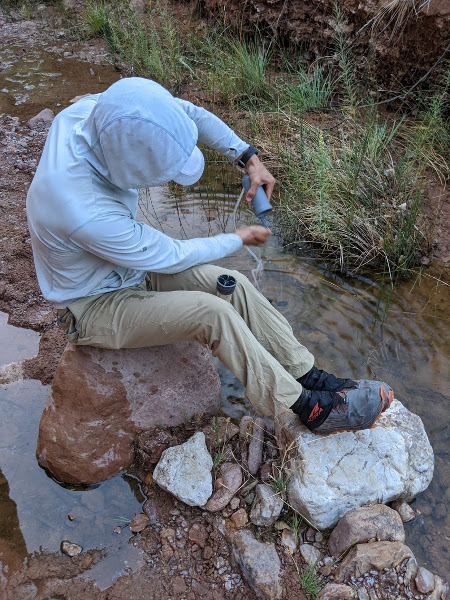 Walking through Horse Canyon was much suffering: Soft Sand and heavy packs. Eric did a good job of navigating us through the shortest path though, sometimes pushing us to bushwhack a little bit, sometimes kicking us through cactuses. Kicking a cactus sucks, but is kind of cosmically hilarious. At least the sun wasn’t oppressive early in the morning. We made pretty good time and got to the end of the canyon after only a few hours. We dropped the packs and walked down as far as we could go, which ended at a long rappel down to the next chunk of the canyon. 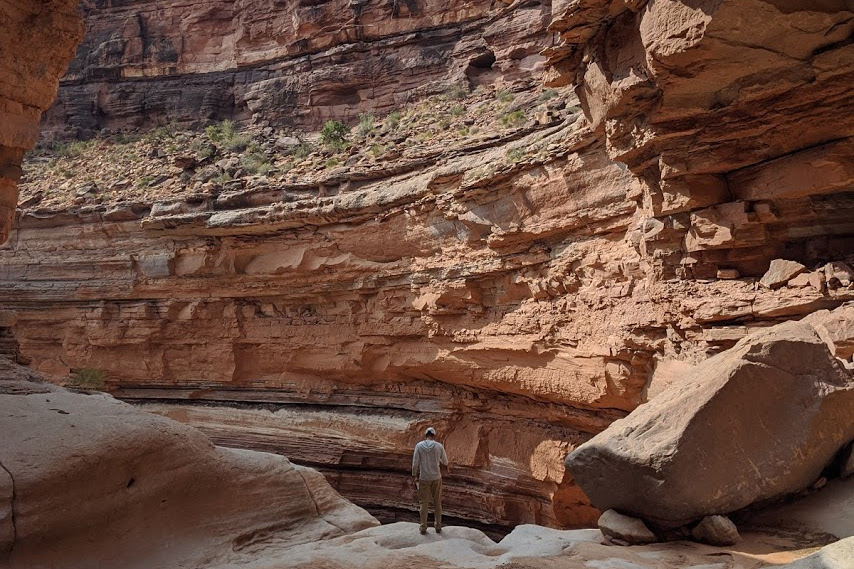 We scrambled up and around into something that’s unofficially just called “Pre-Horse Canyon” and dropped all the way down to the Green River proper. It was a long, funny descent and we had a brief moment of panic when the path ended with a sheer 25-foot drop into the water below. Luckily you can just walk upriver a bit and put-in without a hilarious seal launch. 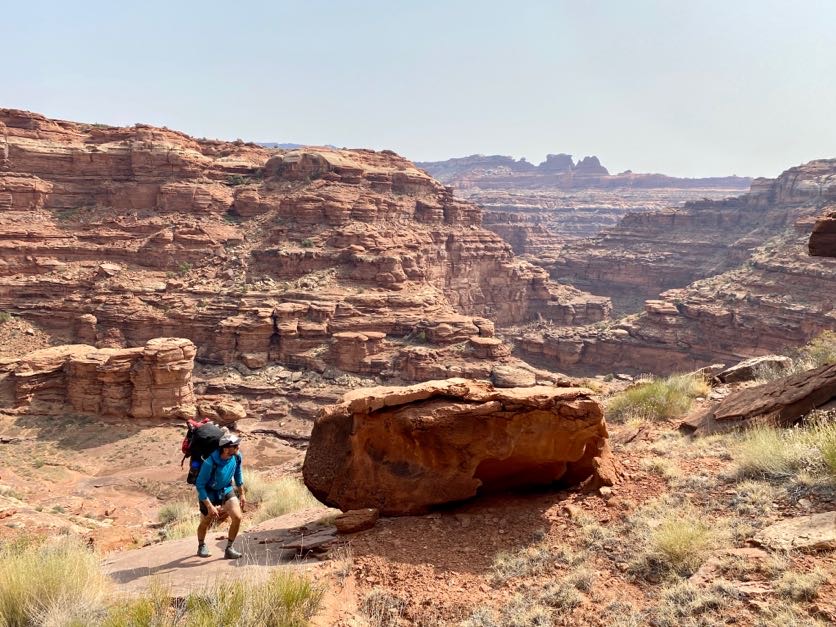 Putting in at the Green. 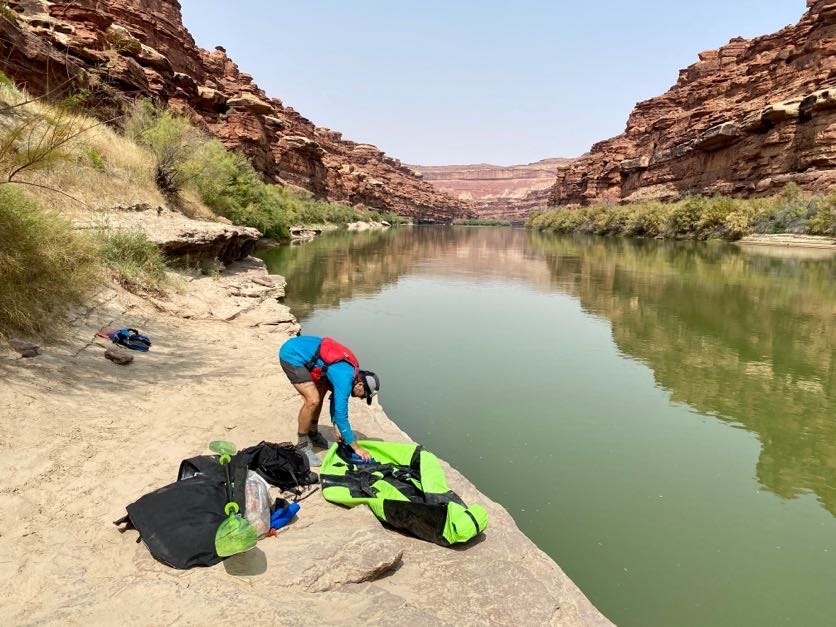 After through hours of paddling, which felt amazing after trudging through sand for a few days, we arrived at camp: A nice little sandy beach that slowly eroded as we slept. 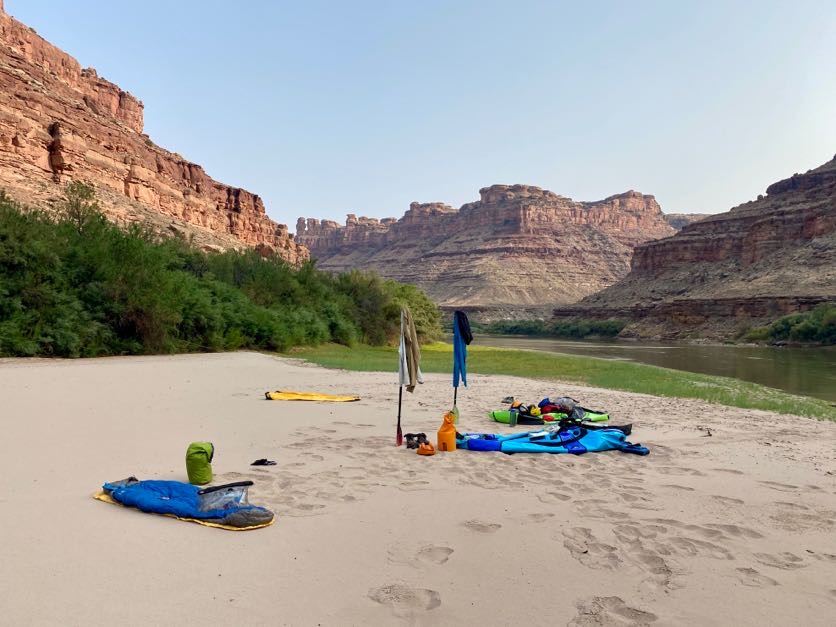 It was our first chance to wash off the canyon-grime and we both jumped into the river while there was still some sun. We again went to bed pretty early after just lazing it up on the beach for a while. 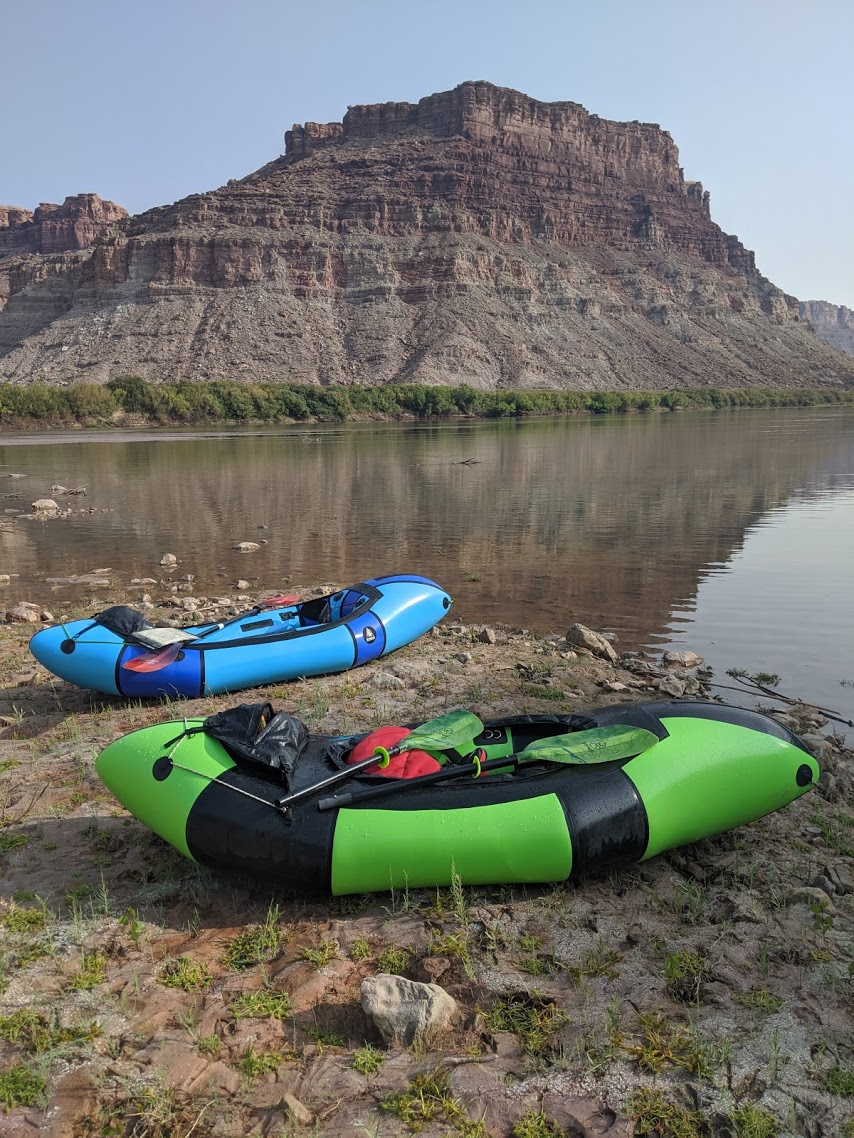 “I’m as masochistic as the next guy but I don’t paddle flatwater all day just to reward myself with hot olive slop” - Eric, on the worst dehydrated meal he’d ever had.

We were both feeling pretty lazy but managed to get up while it was dark. Nothing was totally dry but it was dry enough: My single NRS Silkweight Hoodie was starting to feel pretty stiff and salty, but it was time to put on my next pair of clean socks so that felt amazing.

We paddled for a few hours after breaking camp and made it back to basically where we’d been a few days before, across from Spanish Bottom. We’d seen a lot of parties camped along the banks. Turns out when you don’t want to run Cataract Canyon, you just wait until the jetboat comes to pick you up. It seems very wrong to me to float down a peaceful chunk of water only to have a boat with a huge engine ferry you back up days later. 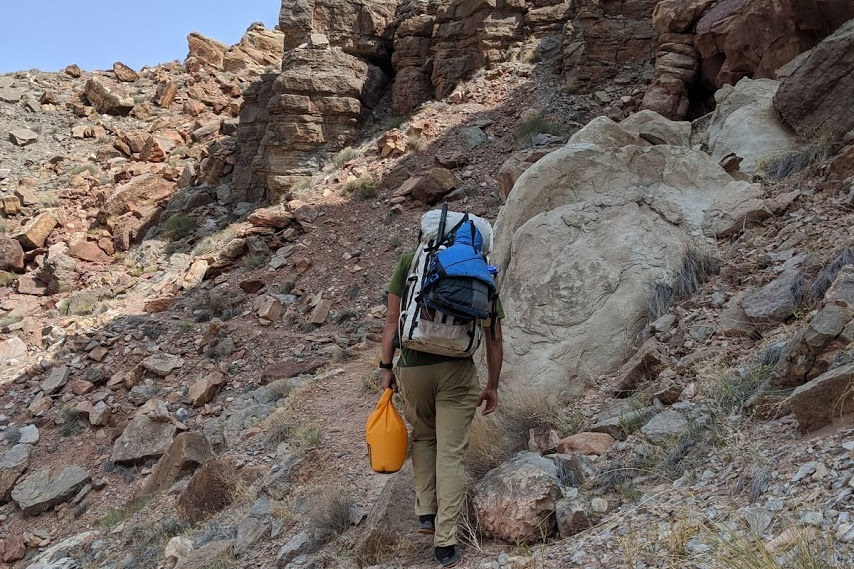 This was probably the hardest day for Eric: Water was a problem the whole trip, both because it was hard to find and again because the river water was full of silt. This required us to “settle” it over night with alum, which makes the water taste like deoderant, and then carry it with us over long, dry distances. For camp this night, there’d be absolutely no water so Eric came up with the idea of carrying two and a half gallons of water or so up to the Devil’s Pocket where we’d be sleeping. He basically carried a kettlebell all day, up the canyons, through the sun and still with heavy packs. Absolutely brutal, but we had water for that day and the next. 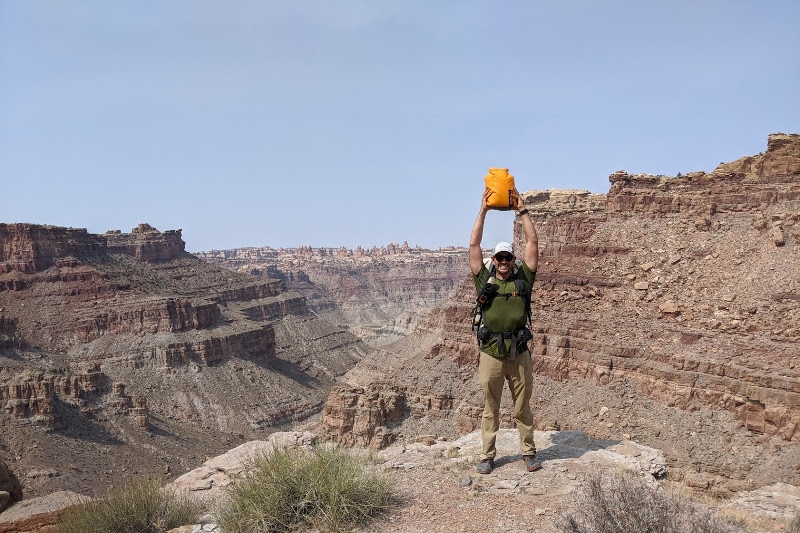 We were so messed up by mid-afternoon we decided to just stop at our campsite and rest. We’d had grand ambitions of a day hike, but climbing all the way up the canyon walls in the sun really destroyed us. I was totally dehydrated and Eric was all twisted because of the water-haul-in-the-drybag-technique. We just sat and ate all the food we had and hid from the sun. It was a tough day. 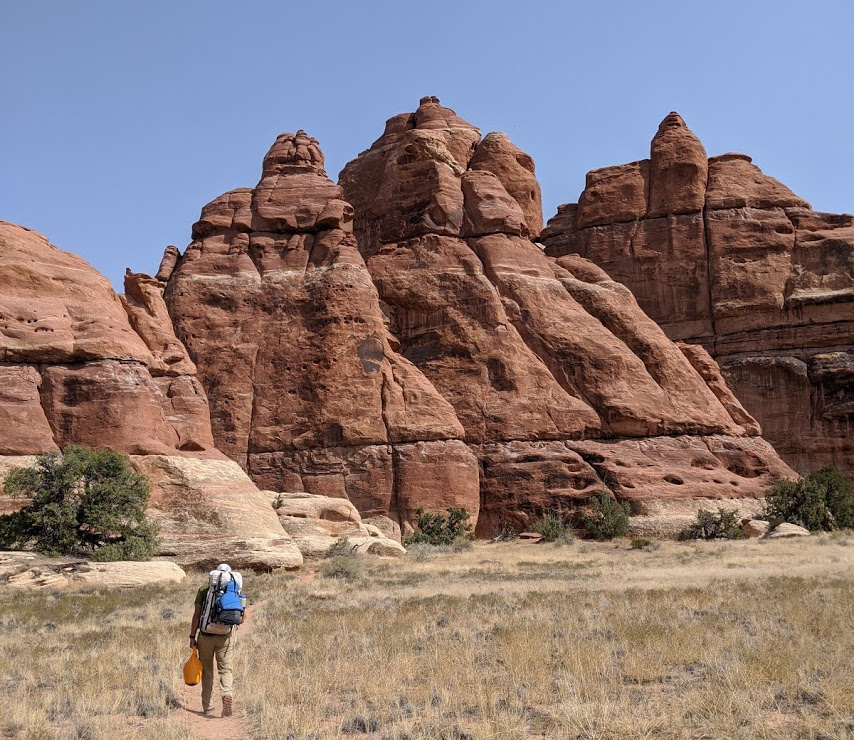 We slept well in our slot canyon campsite. 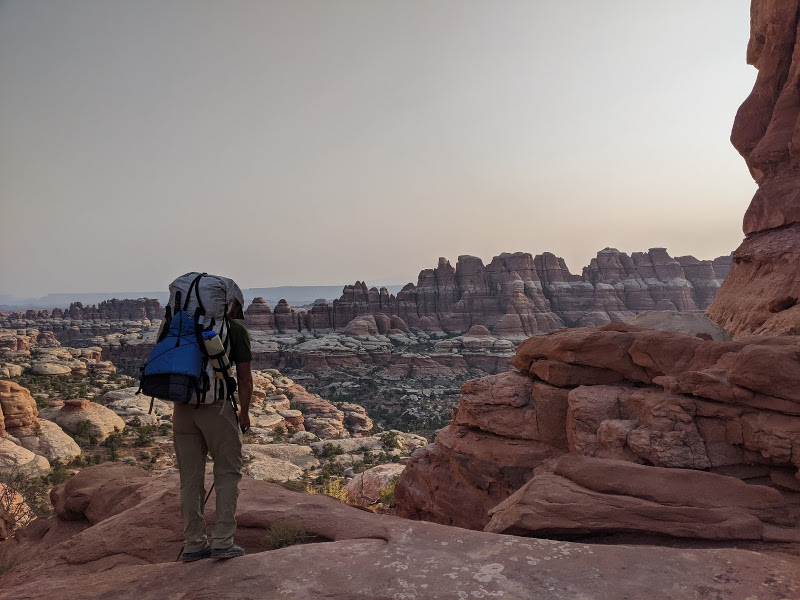 The final day, and our biggest on foot. We had light (sorta) packs, just enough foul-tasting water to get by and only a single day’s worth of food left. We decided to push it and went for a bigger loop. 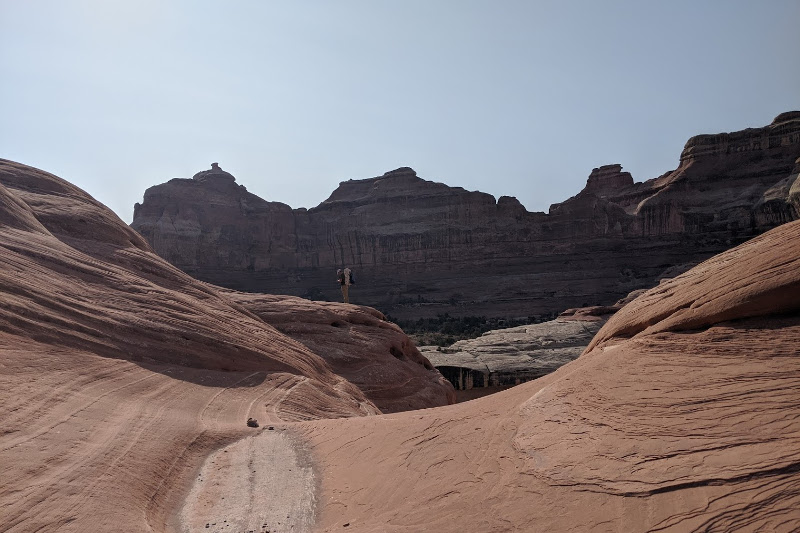 We mostly trekked with our own thoughts through weird, deserty alien rock formations. The terrain changed wildly, from smooth, water-worn rock with iron ladders to drop us into canyons, to overgrown and shady forested floors. At this point we’d seen so much wild terrain we were ignorant to the strangeness of it all. 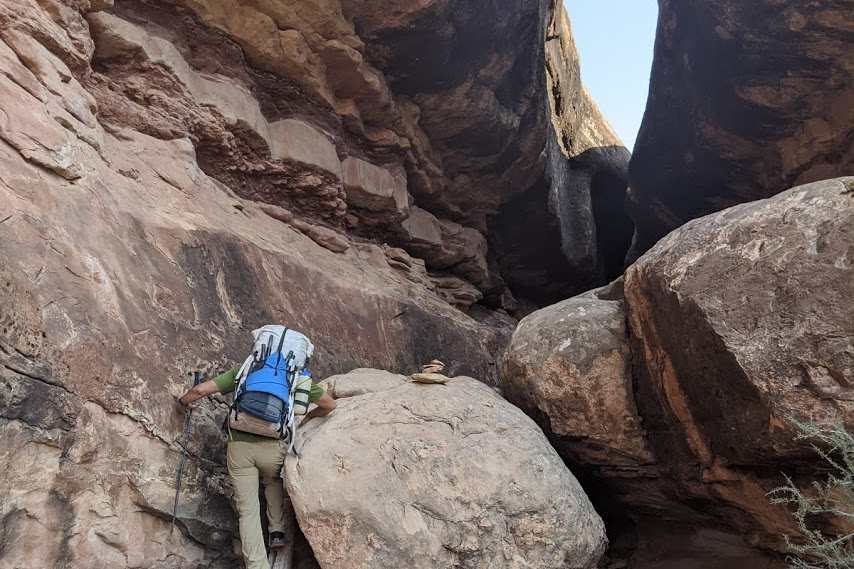 We finally started to see people, too, which was when we really knew it was over. An older couple we talked to for a while said they were visiting their last feature in the canyonlands: they’d seen everything else. They called themselves Desert Rats and I really liked that. It was inspiring to see people who’d spent enough time in the desert to literally see it all: Every arch, canyon and petroglyph. 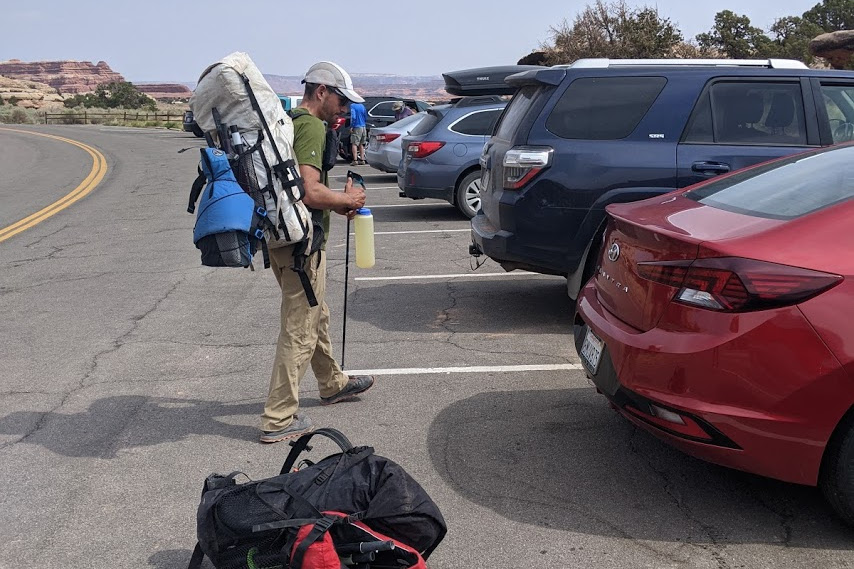 And just like that, after 90 miles through the sun and the river, we were back at the car. We threw away all our wag bags (oof), ate the rest of our food and headed back to Moab to drink clean water and find showers.

If you want to know more details, email me or Eric and we’d be more than happy to share experiences and beta. Thanks for reading! Heres to now.